I love Despicable Me, I do. It was the first movie that Wyatt paid any attention to and I've lost count as to how many times we have played it. When I was first teaching myself to crochet, I knew I had to attempt a Minion hat for him. After some trial and error, I finally managed this:

I've gotten a lot of comments throughout the year while we're out and about, as well as many people who have asked if I'm selling them. At that time time, life was a whole different type of crazy so I repeatedly declined. Well, it's cold once again (thank you 6 month long Wyoming winters) so we've pulled it out of storage. A couple of weeks ago, we got stopped several times on the pumpkin walk with requests for a minion hat. On a whim, I decided, "Suuure. I sell them." I posted a picture on Facebook, and within 5 minutes had over 8 orders. Which has since grown.

I enjoy crocheting. The extra Christmas cash will be awesome, but I'm beginning to resent minions and yellow and blue in general! With that said, I still have plans to open an Etsy shop and hope to have it open in another week or two. In the mean time, if anyone is interested in a custom hat (I can make more than minions) , you can email me at tiffhult27 (at) gmail (dot) com

I have decided on my new fitness program. T25 it will be! I plan on starting it with the new year. Until then, I'm going to stick with Jillian and running. The next several months are going to be hectic and I know I want have the time to dedicate to a structured program. So, I'm doing my own thing for now! I have heard nothing but positive feedback on T23, though, and can't wait to start.

I'm planning a Halloween Weekend of Fun for Wyatt. Last year, we did a full day of pumpkin coloring, and Halloween themed food. As he's a little older this year, I think we'll take it up a notch.

Holidays were always a big deal in our house growing up and that's something I'm trying to pass along to Wyatt. There will be pictures to come, I'm sure.

I've been really good this year and haven't brought a spec of Halloween candy into the house... yet. However, these have been calling my name for weeks:

And last but not least, Happy Friday from Super Wyatt 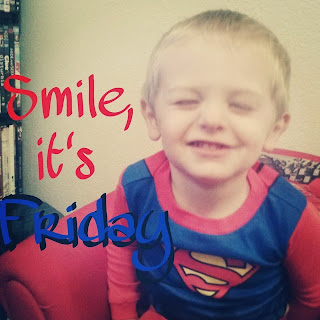