Wyatt has been potty trained for 2 weeks now, and I'm finally getting around to writing about it. Life.

In all honesty, one of my biggest fears from the second I knew I was expecting, was potty training. No joke. My baby didn't even have all his fingers and toes and I was petrified thinking of the day I'd have to potty train him or her. Now that this part is out of the way, I can go on to being scared to death of the teenage years, which is a far more logical fear...

Back in September, Wyatt was showing all the normal physical signs that he was ready to potty train. I did research online. Found that apparently the "3 Day Method" is all the big to do these days. People are potty training kids before they can walk, for crying out loud. Wyatt was 2 and half - he's ready! let's get this party started! It was more that mom is ready, Wyatt was not. And he let me know it that weekend. It was a complete disaster and we gave up before noon the first day.

After that, Wyatt became terrified of the toilet so I took a huge step back. I didn't even mention potty training or underwear to him until after the holidays. After the new year, I got him in the habit of sitting on the potty before his bath every night. Just to get used to the idea. No more rushing him. I'd let him decide when he was ready. In all honesty, I didn't think it would happen before he turned 3.

About a month ago, Wyatt started insisting on trying to change his own diaper. That's when I put my foot down. If you can clean up your own crap, you can sit on a dadburn toilet! So I started rethinking how we were going to go about it this time. 6 months makes a big difference  in the life of a 2 year old. He's a very different little person now than he was then, and I'm a very different mommy.

I had a vague idea of the type of chart I wanted, but couldn't quite put together how to do it exactly. With Wyatt's personality, I felt it was important for him to visual see that while he isn't in trouble for accidents, they aren't a good thing. The point is to keep the underwear dry. So, I came across this amazing chart from Approaching 30! You can find her tutorial HERE. It seemed perfect! I haven't talked about it much, because time is hard to come by, but I've been sewing clothes, quilts etc... since I was 7/8 years old. I participated in 4H Sewing for several years. I love it. It's one of the few things that come naturally to me and I've missed it. This chart was the perfect opportunity to get to sew a bit. 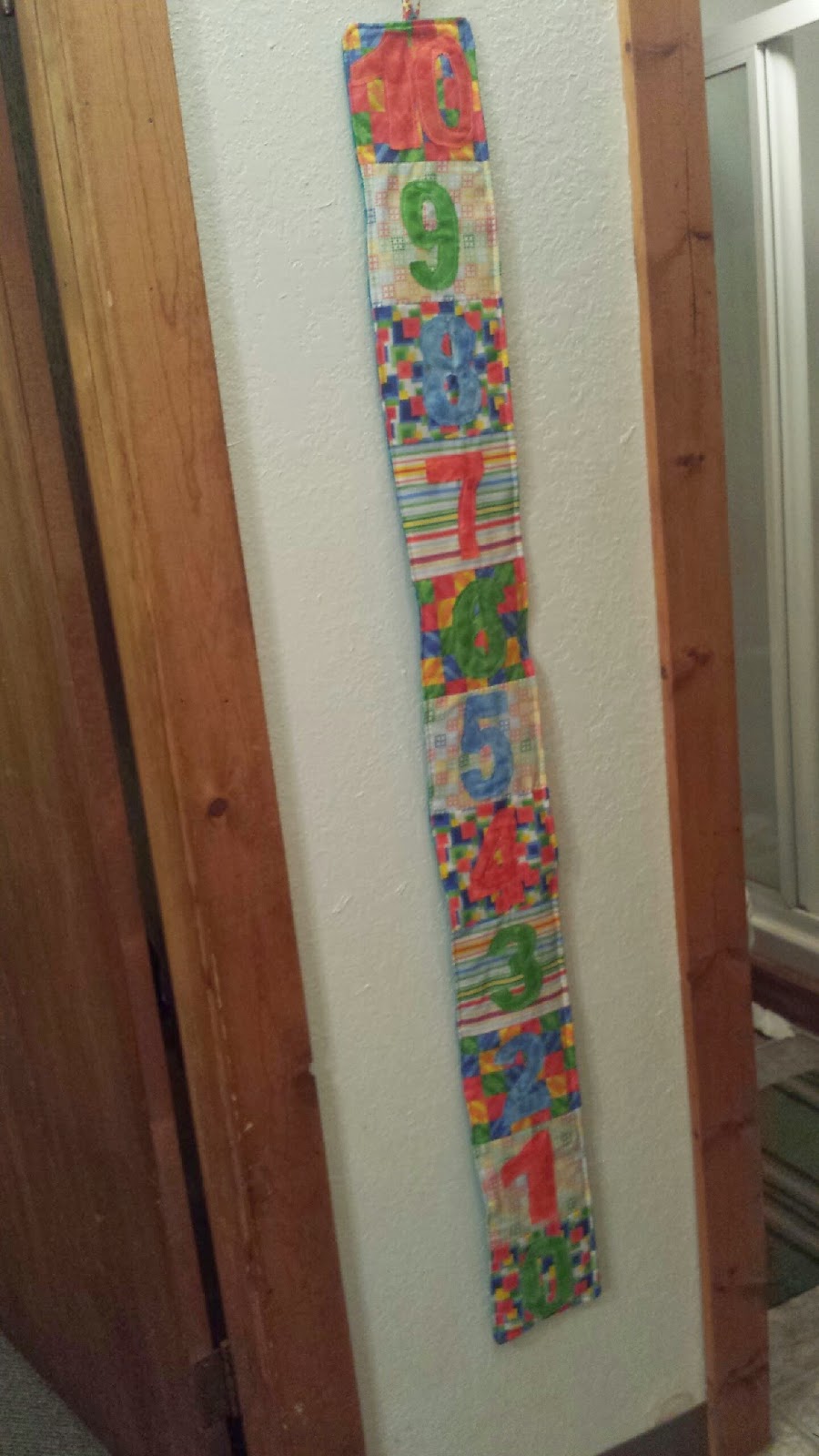 This picture doesn't show the clothes pins, but here's how this little chart works:

Starting on the zero, there is a clothes pin with a picture of a toilet on it. For each successful trip to the bathroom, he got to move the pin up a block. For each accident, it would move back down one. When he reached 10, he knew that he'd get to pick a toy at the store.

It was seriously the easiest thing to make...


Cut 11 even blocks to whatever size you prefer.

To cut the numbers, I printed out 0-9 in Word and used those as a stencil to trace onto the fabric. 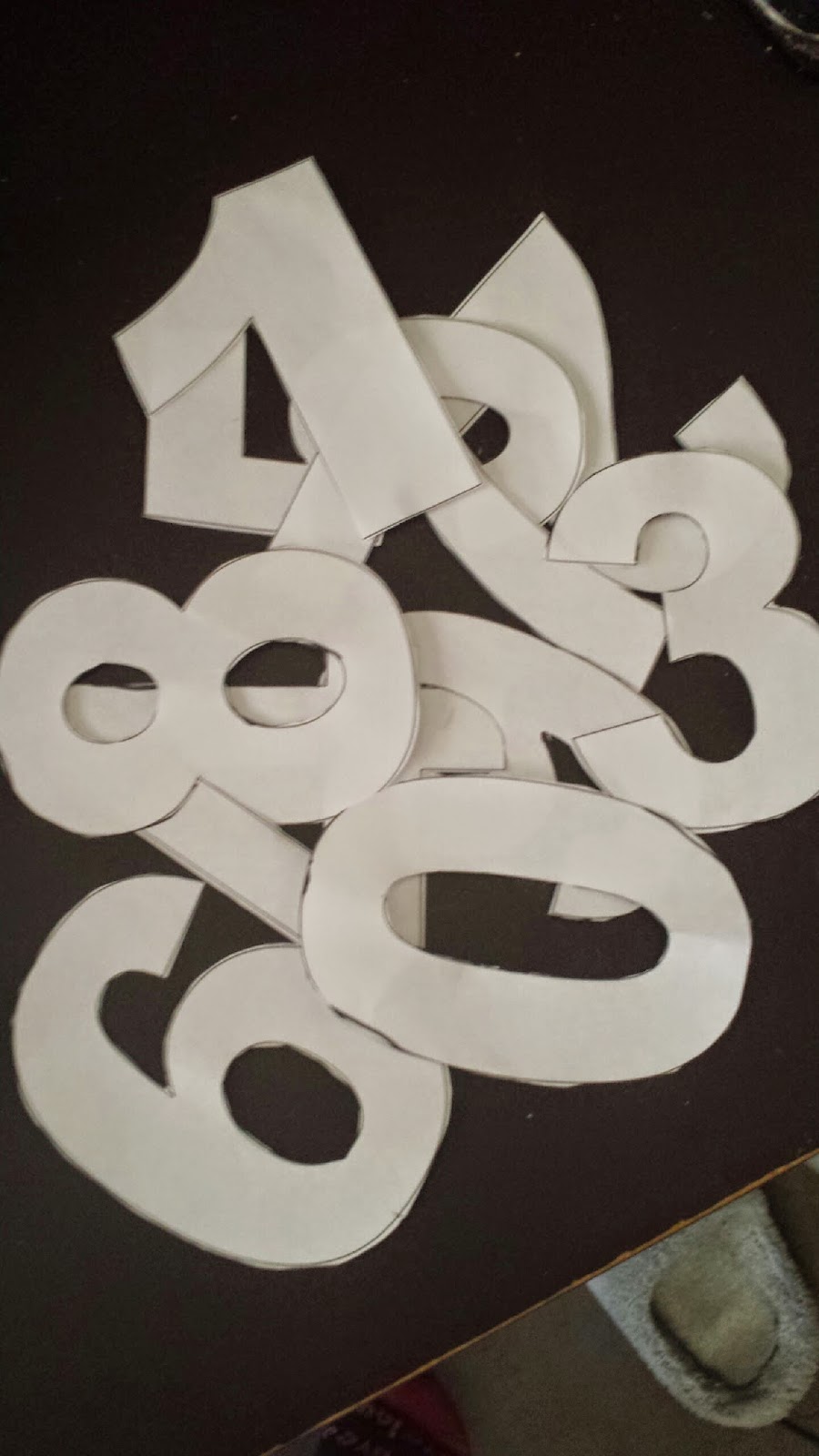 First, sew the numbers onto the squares, then sew the squares together. Add the batting (if you choose) along with the back. I used a small piece of ribbon at the top for hanging. 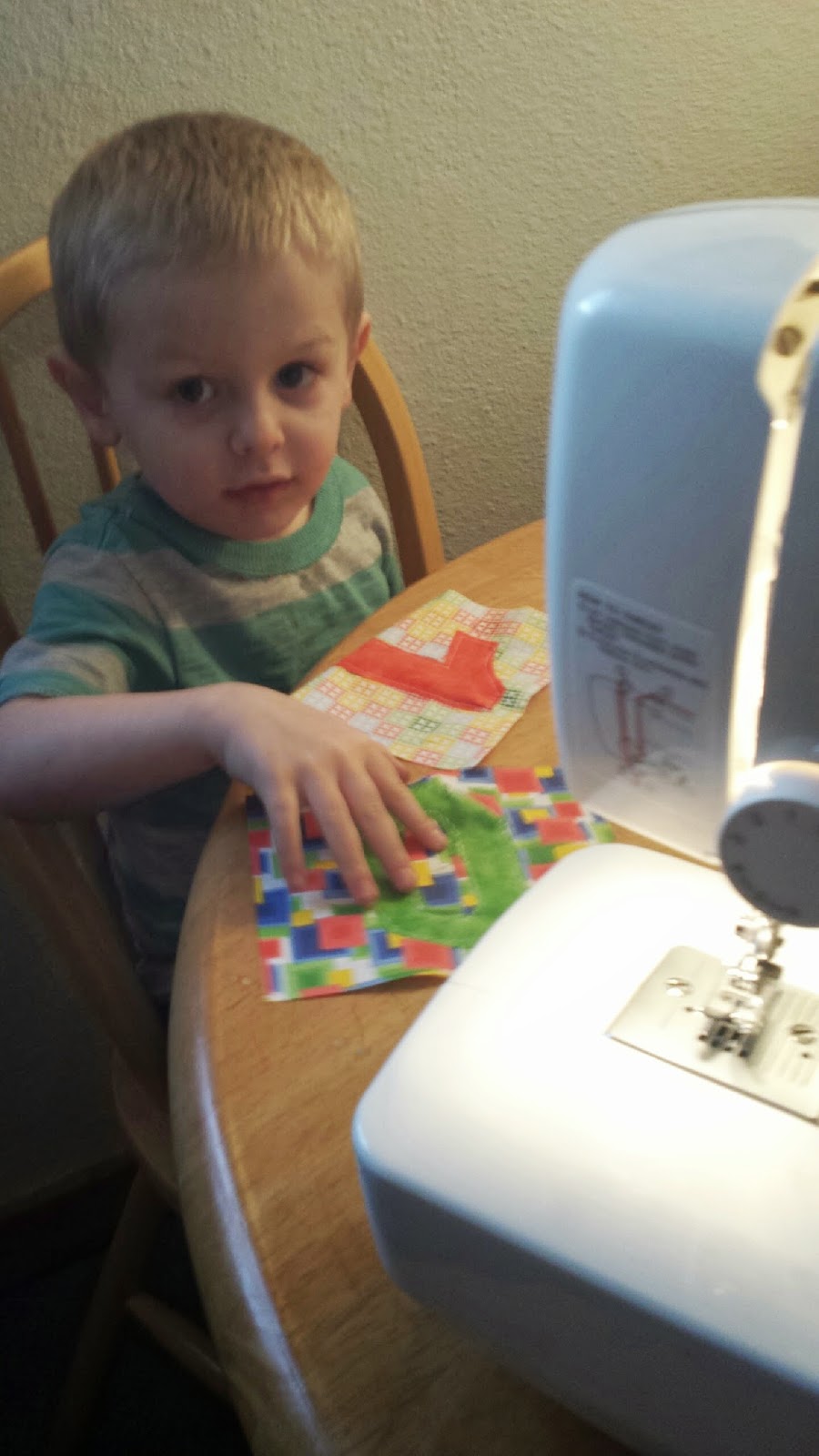 I included Wyatt in every step of the process so he would feel more involved and excited about his chart. As a result, please excuse the sloppy stitching in pictures. The nice thing about this chart, is it can be used for other things in the future. I also made a "pick up toys" pin and "follow directions" pin etc... He won't get a toy every time he reaches 10 with those, but maybe things like frozen yogurt trips, pool trips etc... 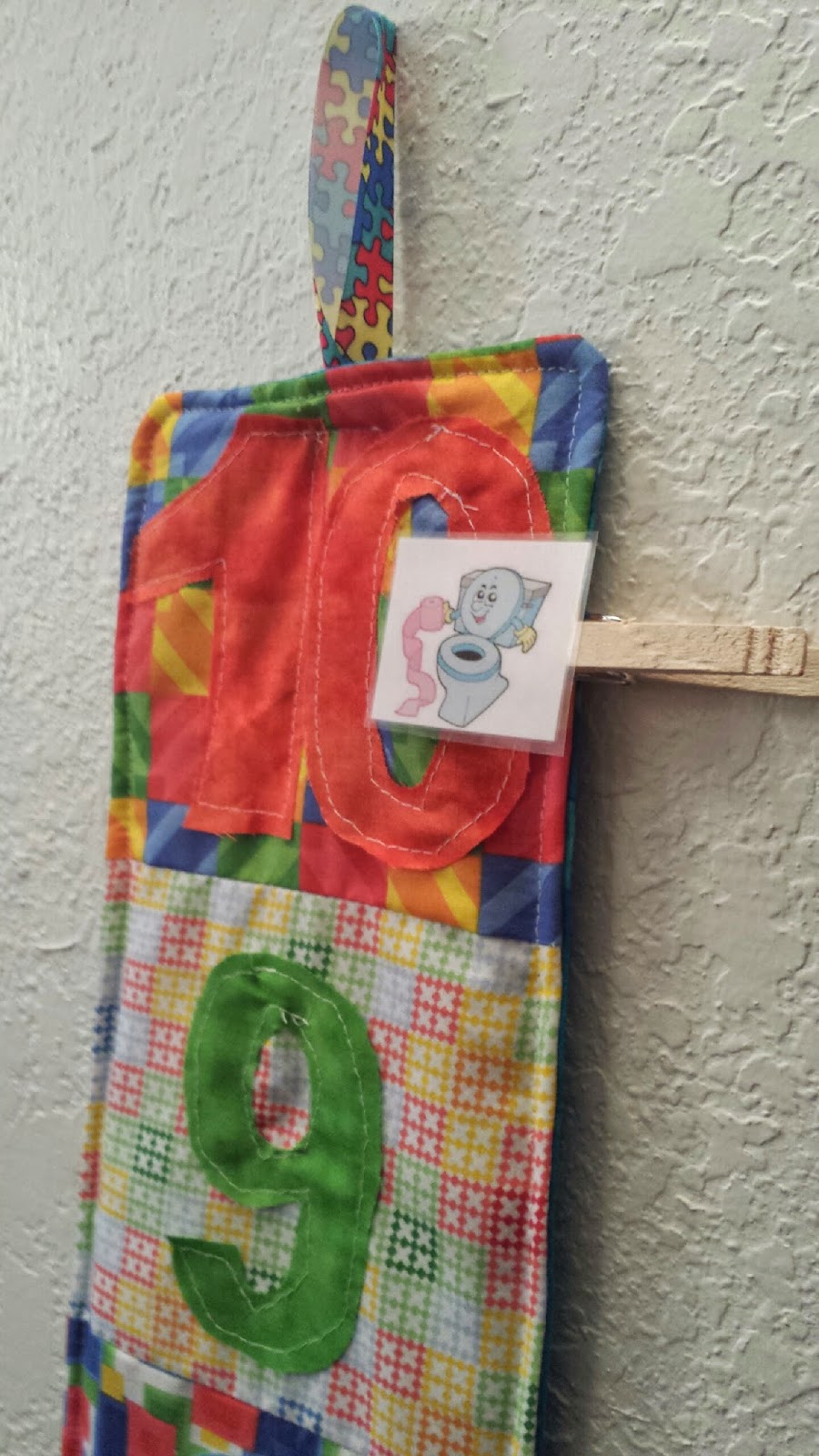 He must have really wanted a new TMNT because he made it to 10 the first day. The chart made a huge difference. He was so determined to keep that pin moving on up. I was so impressed! Although, it was quite the day. He did have several accidents, and used the potty about every 20 minutes. 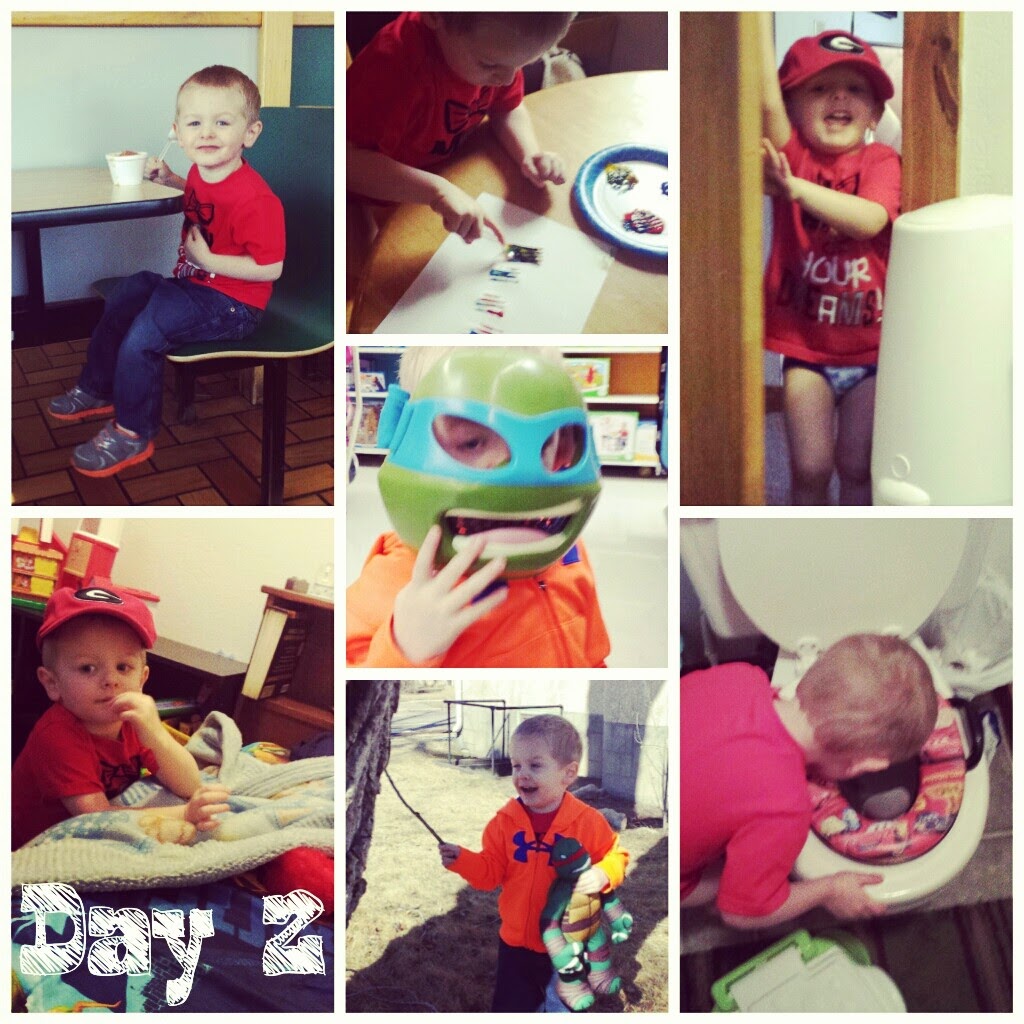 Only 2 accidents on day 2 and he hasn't had one since! We went out for ice cream that day and to pick out his prize to celebrate. Big plus, no head dunks this day.

We also started Day 1 by reading this book and watching the movie: 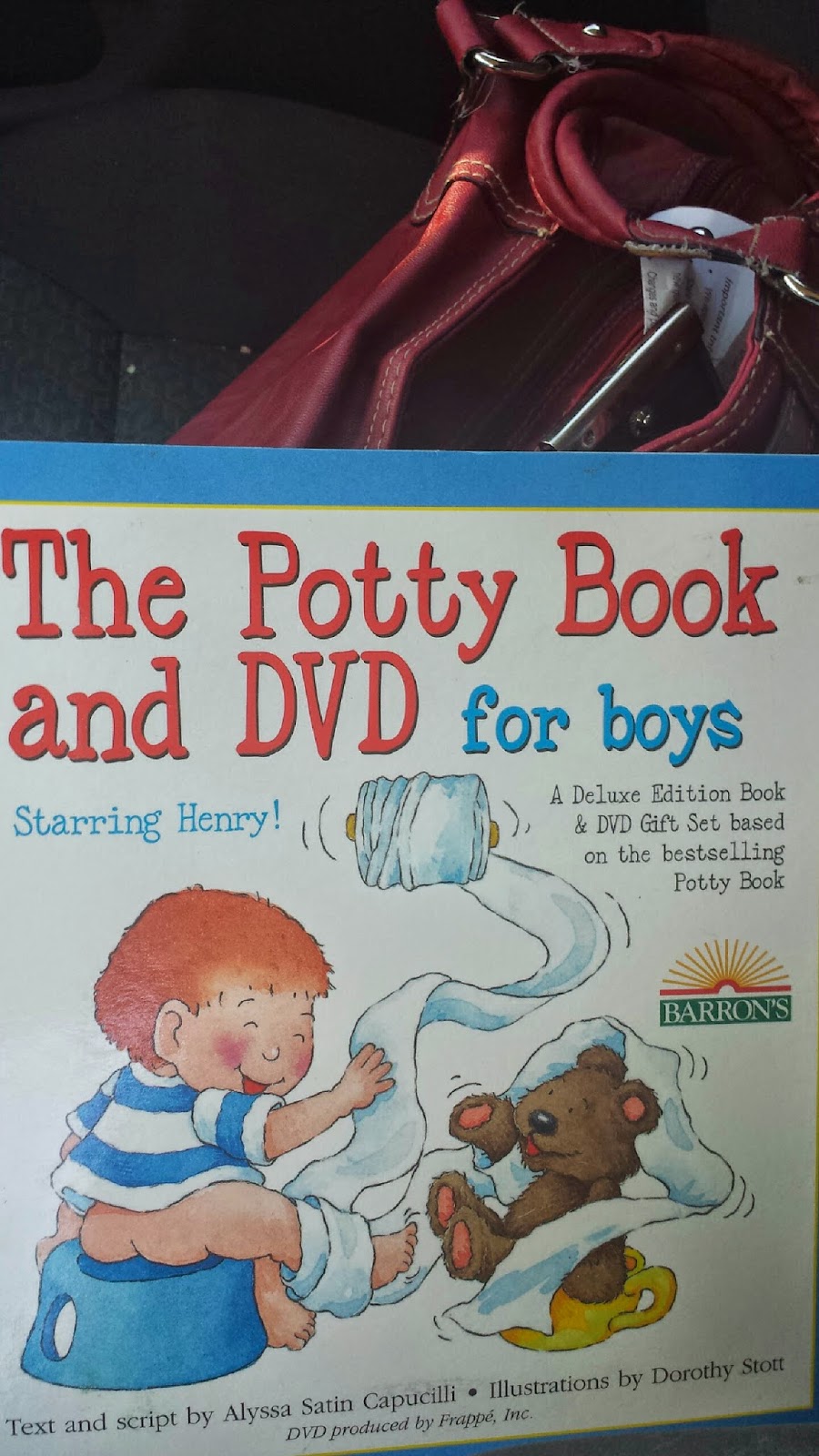 I  kept reminding Wyatt the whole week leading up to Operation Potty Training that we were going to get rid of diapers and wear big boy underwear over the weekend. He was not happy about it. There was some crying once I pulled the underwear out, but after reading The Potty Book, he relaxed and we were smooth sailing!